PM Johnson has closed down his own Parliament in order to pursue his no-deal Brexit agenda,

As PM Johnson channels his inner Churchill and switches the lights off all over Europe,

European Council President Donald Tusk has warned he will not cooperate with the UK on a no-deal Brexit.

In other words,  the EU will do nothing to mitigate its pains.

Whether it acts in the future to increase UK pains remains to be seen.

For the moment, this is what we know

All EU Treaties will cease to apply to the UK, without any substitute or transitional arrangements being put in place.

2) What are the pains of a No Deal Brexit?

You can read the full UK Government Yellowhammer report here

Remember: This report states what is likely to happen.

It’s by no means the worst case scenario

3) What about food shortages in Ireland?
There is a strong likelihood that food trade on the island of Ireland, as well as food trade between and through ROI, NI and GB, will be disrupted. Nevertheless Ireland produces plenty of food  for her people

Government ‘planning assumptions’ for no-deal imply that severe disruption will commence on the day after Brexit and continue for several months, after which time food trade will settle down at a considerably lower level of activity than prior to 31 October.”

Food, no-deal and the Irish border

Remember: I’m talking to Scotland, Northern Ireland and the Republic of Ireland here, in this very post

This info is for you all  because there will be difficulties  delivering food to all outlying areas of the UK and to the Republic of Ireland, simply because of their geographic location.

And you can be quite sure the UK Government will not be making any special contingency plans to help us out.

1) These potential  food shortages  will occur in the winter months, when people need more sustenance to combat the low temperatures and harsh climate in the North and West Atlantic  territories.

2) This is when the elderly, sick, weak/delicate and young are particularly vulnerable to coughs, colds, flu, bronchitis, pneumonia etc . Even when they don’t need hospitalization, they need their prescription medicines (which may not be immediately available as they are today) and careful nursing in a warm home environment with good sustaining food like fresh vegetable and chicken broths, freshly squeezed orange juice etc.

Query: Would the Irish ever accept or forgive the English for risking “an gorta mòr” or even “an gorta beag” once again?

4) What happens if PM Johnson  refuses to pay for the UK commitments to the EU, as he said he will do?

There’s the threat of going into a judicial action which would tie the UK up in the international courts for years.

The UK’s credibility would be shot to pieces.

No nation would ever again trust them to deal honestly. 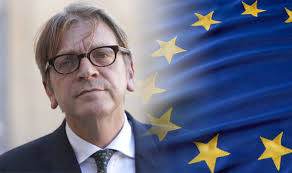 “If the UK doesn’t pay what is due, the EU will not negotiate a trade deal.
“After a ‘no deal’, this will be a first condition of any talks.

I can  imagine the EU will lean on the other 70-odd countries with which it has 40 trade deals to ensure none of them feels inclined to “roll over” their EU trade agreements to the UK in a sort of “cut-and-paste” job lot.

Remember: Since the #Brexit vote, the EU has agreed trade deals with:

In case of No Deal Brexit, all the EU trade agreements , which the UK is automatically part of, as an EU member state,  would fall by the wayside. All would need to be re-negotiated on a bilateral basis of UK and the other country.

Re-establishing the UK’s trade agreements and networks (which take years to negotiate) will be a long and complex process.

Consider also that the UK has had zero experience of negotiating trade deals for the last 40 years and has no trained, expert negotiators!

5) What’s so important about a trade deal?
It sets out an agreement between one state and another on trading practices

Remember: A trade deal does not create any revenue or jobs.

It merely sets the scene for business investment, should companies decide it is in their interest to avail of the set-up.

6) What about on-line shopping?

Buying online will change immediately if Britain leaves without a deal.

” for customers in EU countries, in the event of a no-deal Brexit, immediate changes will come in the form of increased VAT, import tariffs and changes to consumer rights protection for products bought from the UK

Consumers have strong rights when buying within the EU, particularly if they change their minds or if goods are not delivered”.
“These rights do not apply if you buy from a business outside of the EU.

Following a no-Deal Brexit there will be changes to your rights if you are buying online from a UK based retailer,”

Selling online will change immediately if Britain leaves without a deal

Intra- EU and Rest Of the World data flows will go on as before.
BUT . .. data flows to the UK will change as the UK changes to a 3rd Country.

Remember: UK businesses may find themselves in the nasty position of not being able store or access personal or sensitive data of EU citizens.

So how can they sell them anything ?

Take, for example, a UK hotel or chain of hotels, a guest-house, or an AirBnB establishment
They will not be able to contact their previous EU guests to inform them about promotions, new deals, special offers and so on. EU data will no longer be accessible for a 3rd country

UK micro-businesses risk facing a hard future, as it is not easy to source tourists from the rest of the world to replace EU visitors.

7) What happens now with the Belfast/Good Friday Agreement?

Remember: If a country has ratified an International agreement, it is morally and ethically bound to honour it.

The UK has gone to great lengths to state over and over again that it will not put up a border on the island of Ireland.

This specious argument tries to convince people that the UK is not “breaking” the Belfast/Good Friday Agreement.

We all know that it is.

They voted to remain in the EU

*Brexit and the Conservative/DUP “confidence and supply” arrangement have already breached the Belfast/GF Agreement as the UK Government has not maintained “rigorous impartiality”.

What are the potential repercussions for the UK?

Since the UK  accepts the jurisdiction of the International Court of Justice (ICJ), then the process can be followed up in the ICJ. The Republic of Ireland may even re-instate its claim to the entire island of Ireland which was abrogated to facilitate the Belfast/Good Friday Agreement.

However . …  the rogue UK  is one of the UN Security Council’s five permanent members.
Since it will be difficult to make the UK toe the line,  groups of countries will probably get together to make sure that the UK falls in line.

Even then, it may become impossible to make the UK responsible for a treaty it has ratified, if it chooses not to honour it.

The UK may choose to become a pariah state

Remember: I’m talking to Scotland, Northern Ireland and the Republic of Ireland here, in this very post

This info is for you all

PS If you have any  other questions, please ask below the line in the comments section.

I’ll do my best to answer them

6 thoughts on “Mr No Deal – Warning Ireland and Scotland – FAQ”