Background
Since Northern Ireland was set up in 1921, the Border between NI and the Republic of Ireland  has been the main bone of contention between “British” Unionists/Loyalists and Irish Nationalists/Republicans.

Brexit, and the DUP’s role in it, have forced many Unionists to question past loyalties and allegiances and Nationalists/Republicans to question NI’s present status quo. Although Unionists held on to the North in 1921, today they constitute a minority in both the Republic and NI.Their grasp on on NI weakens as support for Irish unity increases together with a desire to remain in the EU.

The Irish march like the Catalans and the Scots.
Comment: Calls for Unity are coming from not only from Sinn Fein and the Republican Movement but also from  civic nationalists who are disillusioned by Unionism’s constant pursuit of anti-Irish policies and refusal to respect them as equals.

said Arlene Foster, DUP leader.“I have better things to do with my time.”

1) Unionism says No to any forum/civic assembly/think tank etc to discuss preparations for a United Ireland.
Comment: NI Unionism imitates the UK govt which refuses to hold a Border Poll or a Scottish IndyRef2. The Union is maintained by flatly refusing to talk to anyone questioning its validity.

because getting involved in a discussion on Irish Re-unification undermines its only raison d’etre, which  is to remain part of the UK, whatever the cost. Unionism has been fighting for the Union politically and in arms for over a century, aided and abetted by UK Governments.
Comment: Unionism thinks its refusal is a veto. Ireland’s future can’t be discussed without its agreement, even though Unionists/Loyalists deny a United Ireland’s right to exist. However. . . . Unionism’s consent  isn’t a pre-requisite. In signing up to the Belfast/GFA, Unionism agreed a United Ireland had become a legitimate aspiration.

Query: Will the rest of the population have to accept this “veto”?
No. Giving one community a veto on having discussions will never lead to anything positive. Unionists may well refuse to talk but they cannot veto talks. If they refuse to engage, then they have no one to blame but themselves if they don’t like the  outcome
Remember: the 26 Counties would never have become a Republic, had they depended on Unionists’ permission.

Any other reasons for not taking part in a discussion on a United Ireland?

3) Unionists risk accusations of Lundyism, ostracism by their community

and possibly Loyalist paramilitary-linked harm to themselves and their families. It’s not easy to be the first to break rank

Comment: Form a group. It can’t be more difficult than living under  fear of community censure and violence

4) Nothing Nationalists/Republicans can do or say will talk Unionists into a United Ireland.

5) Some Unionists/Loyalists want nothing to do with anything Irish. They have no interest in the ROI,  don’t know what goes on there and couldn’t give a toss anyway.

Comment:  That lack of interest and curiosity is very sad. Most nationalists/Republicans are interested in Great Britain and what goes on there

6) The Irish language is incomprehensible, sinister and secret.It’s “weaponised” 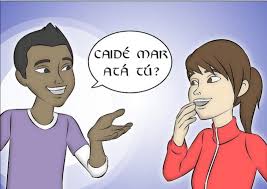 It is a treacherous plot, a Machiavellian political scheme of the disloyal and the dangerous. Unionists don’t see a language. They see Republicanism which they have always opposed.
Comment: It’s hard to reason with people who confound a European language with a political philosophy. FWIW, nobody will be forced to learn Irish in a United Ireland. Exemptions are already in place from primary school onwards for certain categories of citizens in the Republic.

7) Unionists are British and want to stay British

They watch the BBC news. They love British soaps and are fans of UK sport. They listen to UK radio programmes.They study British history.  Unionists don’t share identity, background, mental outlook and history with the Irish. They don’t want to become Irish.
Comment: Lots of British people live in France, Spain and Germany without sharing identity and history with those native populations.They don’t stop being British.  Thanks to modern technology Brits abroad listen to UK radio and watch BBC, ITV and Channel 4 programmes if they want to.

Query: Do Unionists know the British consider them as Irish?

8)Unionists are angry that Nationalists/Republicans are represented by people who celebrate individuals Unionists consider to be murderers, bombers and terrorists

Comment: The Republican/Nationalist community feels frustrated that Unionists celebrate British state forces and connive with loyalist paramilitaries, both of which caused the deaths of many men, women and children in the Catholic community.

Query: Isn’t it time to set history aside to make way for Ireland’s future?

9) Sinn Fein are the big stumbling-block to a UI

SF/IRA promote a United Ireland, and always have done so. Since Unionists/Loyalists think SF  are still fighting the war without the guns and bombs, most want nothing to do with it or Gerry Adams. SF  prevents support for talks about a United Ireland.

Comment: Any excuse will do to avoid talking to the major party that is actively promoting unity.Unionism uses the past to prevent Ireland from moving on, without considering its own role in violence,anti-Catholic pogroms and sectarian murder from the Larne Gun-running in 1914 onwards.

10) Many in the Republic are hostile or indifferent to a United Ireland. They wish the North would just vanish somewhere.

Comment: Latest polls suggest otherwise, with 60% in favour in one poll and 87% in another.
Senator Mark Daly on the Joint Committee on the Implementation of the Good Friday Agreement is preparing for what could be the imminent possibility of reunification. England supports Irish reunification. They don’t understand why NI wishes to stay in the Union

Comment: Unification is not about what any particular group can get out of it. It simply eliminates Partition, a discriminatory gerrymandered act which led to 50 years of Unionist misrule, 30 years of conflict and 20 years of bitter peace that people are now fed up with.

12) Why not just have cross-border agreements?

Comment: The border is the  problem. It is becoming an EU frontier. As Brexit shows, NI has the potential to unsettle the Republic’s economy and political stability. Any cross-border “solution” could only mitigate border-related damage

Query: Why should Irish people put up with any border-related damage when Partition can be eliminated? In Northern Ireland’s century of existence, no successful solution to its problems has ever been devised within it – or even outside of it, with the help of other countries.

Comment: There are no solutions without ending Partition. There is no positive reason for maintaining Partition. It was, and still is, a selfish act.

12) What about our Flag? And GSTQ? Unionists would like to change the Irish flag and anthem.  An Irish flag without green would be OK.

Comment: It’s in Republicans’ interest to have a non-offensive flag  for a United Ireland

13) How would re-unification be paid for?

Comment: The EU, UK and US will fund it. The economic boost it generates in Northern Ireland will help tackle deprivation and other social problems.

14) What about mortgages, pensions etc?

Comment: Reorganized European states include Ireland in 1922 and Germany in 1990. There were no issues with pensions, mortgages and so forth. Regardless of UK commitments, the Irish State will honour public sector pensions just as they did after Partition.

15) How will we reconcile two radically different health services?

Comment: They are both so bad at present, the only way up for each is through amalgamation. They can be changed by expanding the “free at point of care” concept which the Republic is already doing. This is a common EU health care model.

16) Could Unionists campaign for the Re-partition of Ulster?

Comment: No. The Belfast/Good Friday Agreement doesn’t allow for it.The options are NI in the UK or a United Ireland.

17) What happens if a United Ireland wins  a future Border Poll (Referendum) and Loyalists refuse to accept the results? or Unionism refuses to recognise the Dàil?

Comment: Ireland moves forward without them. According to the Belfast/GFA, Ireland and the UK have a legal obligation to implement Re-Unification

18) What happens to my children’s and grandchildren’s British citizenship?

Comment: Only the British Government can extend or guarantee British Citizenship to those in Northern Ireland after Unification. It is not within the remit of the Irish state to do so

Comment: The DUP’s stand on Brexit is a perfect illustration of NI’s potential for damaging the economy, political stability, jobs and well-being of citizens all over Ireland. The chance of something similar happening sometime in the future is too great.The Republic can no longer accommodate a politically unstable, economic fiasco on its EU frontier doorstep.

20) Unionists would have no role in a United Ireland

Comment: They will have their farms and agri-tourism, businesses, bars and shops.Some will work as professionals and some in trades.Pensioners will supplement their incomes with odd jobs. And so on.Just like the Brits in Spain

Final Comments: All these 20 objections are easily refuted, without any specialist knowledge, input or discussions and talks. In its attempt to maintain division and low-level strife in NI, Unionism may well produce 20 more and another 20 after that.They will be dealt with in the same way.

Warning:   Unionism needn’t refuse to engage in talks about a United Ireland and then complain their views are ignored.

If they do, they shouldn’t then expect

Remember: If Unionism decides to participate in the talks, they will be listened to and their views taken into serious consideration so as to accommodate them as far as possible.

‘March for Irish Unity’ to take place between Lifford and Strabane