Uproar over a chorus of “Ooh Aah, Up the Ra!” in the Belfast Feile
Cue the latest in Unionist/DUP/Do-Gooder attempts at censoring what bands play and what 10,000 people sing along to.
For those of you who missed it, here is what they objected to – the chorus of the Celtic Symphony that was written by Wolfe Tone’s lead singer and songwriter, historian Brian Warfield, in 1987 for the centennial of Celtic Football Club
https://www.youtube.com/watch?v=DMjr5Z8m_F0

The chorus of one song in a concert that lasted for hours and featured other bands. Doors opened at 3pm and the Wolfe Tones didn’t get on stage until 10pm

If Unionists/Loyalists and Do-Gooders get their way in their calls to “End all funding for the Feile”unless the content is approved by them, Nationalist/Republican freedom of expression will be censored this year and the next, one song after the other.

NI will be back in the 1920s-1970s when you could be jailed or interned for waving a tricolour, meeting in groups of more than 3, singing Amhrán na bhFiann or any other “rebel” song.

The Wolfe Tones called the uproar right in designating it as Unionist “crankiness”.
Synonyms of cranky are:disagreeable, irritable, malevolent, ill-natured,captious,peevish,cantankerous,

Unionist/Loyalist crankiness is wearying, day in, day out.

Time to stop putting up with it!

Once and for all

Comment: There are no Croppies to lie down any more.There are no chocolates in Unionist boxes anymore
And there are no Diamonds in their Minds

Girl, understood to be from the Lurgan area, who sang ‘ooh ah up the ‘Ra’ at Feile na Phobail was suspended from her job at top NI car dealer the Agnew Group, pending further investigation. She was identified on a video from among 10,000 concert-goers.

Larne FC suspended Herron, formerly from Celtic FC, after photos appeared online that appeared to show him wearing a T-shirt with pro-IRA slogan when he was attending the concert at Feile. The T-shirt design referred to his old club and to the Celtic Symphony which was written to celebrate its centennial.

John Herron’s contract with Larne FC has now been terminated.

We, the people, inhabiting this north Atlantic Archipelago,

Meanwhile,   let’s relax and enjoy a concert.
It’s been a long time since we’ve had one!
So here’s the music of Ireland’s last bard,  said to be Ireland’s greatest composer 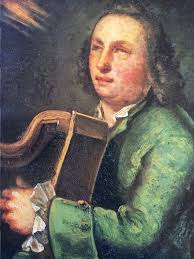 playing and composing for the great and good!

He was born in 1670 and died in 1738.
Son of a blacksmith, he was a blind Gaelic harper, composer, and singer whose great fame is due to his gift for melodic composition.

Only O’Carolan was a harpist and  composed for the harp

You can hear echoes of their influences in his work, but his Irish voice and music predominate

which,  according to Edmund Burke constituted  “a machine of wise and elaborate contrivance, as well fitted for the oppression, impoverishment and degradation of a people, and the debasement in them of human nature itself, as ever proceeded from the perverted ingenuity of man.”

O’Carolan’s most famous piece was his Concerto

Here it is, as played by 30 harpists, protesting early in the 21st C,

at the Irish Governments decision to drive a motorway through Tara,

a mythical site in Ireland

Remember: This is  Ireland’s music  throughout the Penal Laws, another time when England did their worst for Ireland

Whatever the UK decides, Ireland will  move forward into her  own future,

and building upon their achievements   to create the society we want,

not what England decides to dole out to us.

Let’s hope Scotland does the same

Good evening boys and girls, ladies and gents
I’m back
Summer’s drawing to a close

He’s begging for forgiveness and pardon for clerical “sins” –

Crimes to you and me!

The numbers of children and women who were tortured by the church and state is almost too immense to fathom.
For decades Irish  governments sent babies, children and women into incarceration which they knew was brutal and horrific.

What is the Church doing?

Pope Francis is not handing anybody over to the police

He’s not offering compensation to the victims

I don’t see any sign of the Vatican cheque book handy,

to pay up for all the damages.

The Pope’s in Silent prayer….

How about  turning in those Churchmen that allowed/facilitated this and covered up for their criminal colleagues?

So we come to tonight’s film

Shows how gullible we were, how trusting and naive, ripe for the plucking

Let’s hope we have wised up by now – at least enough to look after ourselves!