I am delighted to have the opportunity to let you  see this BBC film on the origin of the Troubles in Northern Ireland which was broadcast only a couple of days ago. It is the first of 7 weekly films which will keep us company as we approach Hallowe’en and Brexit Day!

Since  a No-Deal Brexit threatens to set off a chain of violence again, it’s well to see what triggered 40 years violence in Northern Ireland –  paranoic Unionism that hated Catholics living in  what Protestants saw as “their wee province”.

The very same paranoia and hatred  that the DUP display today as they support Brexit, even though

Background: For 50 odd years in Northern Ireland  Unionists/Loyalists enjoyed  an undeserved position of privilege in a sectarian “statelet” that had been created entirely for their own benefit

Catholics/Republicans and Nationalists were the enemy within. They  had to be repressed, repulsed and oppressed at  every opportunity, kept far from any lever of power, even the right to  vote!

The main trigger  for the 3rd major anti-Catholic pogrom (1969)  in Northern Ireland was the violent Unionist reaction to the Catholic minority’s demands  for Civil Rights. 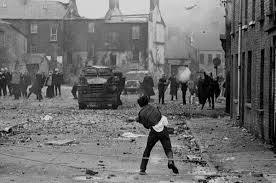 Remember:  The RUC, B Specials and Loyalist mobs that had been whipped up to a frenzy by  sectarian agitators attacked practically defenseless working class communities in L’Derry and Belfast.

They then excused their behaviour by saying they were responding to an IRA attack.

As the narrator remarks at the end of the film – their behaviour brought their fictitious IRA attack out of the realm of a lying narrative and into  real life for every man, woman and child living in Northern Ireland in those years. 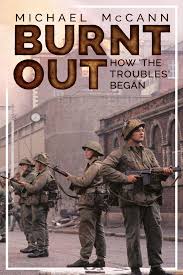 “Burnt Out: How The Troubles Began” by Belfast historian Michael McCann.

He gathered over 30 eyewitness accounts of the sectarian violence which erupted in Belfast and Derry’s Bogside during the summer of 1969.  His research, which is firmly grounded in time and place,  provides evidence of  state and unionist culpability in the ‘birth’ of the Troubles.

Remember: There were reporters  from all over the world, on the streets, who saw exactly what happened and confirmed the victims’ point of view.

As the film progresses, you will notice  the British Army’s tactical and strategic failures at the start of the troubles and see the contribution they made to racheting up the violence and tension as  their behaviour provoked and traumatised  the local people in, for example, The Falls Curfew.

Their reaction was to form and join  the Provisional IRA which added to the cycle of violence.

Brutality and horrors ensued as the State Forces threw all their might into dominating the “insurgency” and the insurgents became ever more determined not to yield.

If you are interested, you’ll find information on most of the key events of the period (Hallmarks of Orangeism/Loyalism, The Falls Curfew, The Ballymurphy Massacre, Bloody Sunday)  in posts elsewhere on this blog.

Otherwise – sit back and re-live events if you were in Northern Ireland at the time.

If you weren’t, sit back and learn how the Troubles started –