(Far right on the map, but remember it is a Mirror Image)

Even as we stall, becalmed, in the Doldrums

“No deal is better than a bad deal”

During the Brexit campaign, Brexiteers promised Brits free trade all over  the Earth, sunny uplands and  a unicorn each.

They triggered Article 50 without a plan. They now fight like ferrets in a sack because

PM May is paralysed and can’t figure out what to do.

The EU will not let the UK have its cake and eat it.

It will not give the UK a deal that lets it keep the benefits of EU membership without the obligations.

And as the Mirror said before, it is not up to the EU  to solve Britain’s problems.

Remember: WTO is no way to go,

No amount of spin will make it so

The EU is not “punishing” the UK for leaving.
The consequences of Brexit are “punishing”.

Catalonia – Shall we talk? 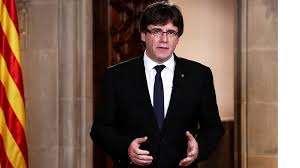 the King of Spain  and his Prime Minister, Conservative Mariano Rajoy

The Spanish King is the first European monarch to threaten his people for 150 or more years.

What he’s doing has not been seen in Europe since the 1850’s (except for the UK in Ireland, of course).

Query: Could it possibly be  a “Monarchy” problem”?

Catalonia voted for a Republic! In any case,

the Spanish government will dismiss the Catalan executive

It will limit the powers of the Catalan parliament.

Elected Catalan politicians will be replaced by unelected Madrid bureaucrats.

You can’t expect Catalonia to remain in Spain only because Catalans are afraid
While the Spanish King and his  Government ensure repression, an authoritarian state and political prisoners, Europe’s leaders tell us it’s an internal Spanish problem

It must be solved within the confines of the Spanish constitution.
Given that very few separatists are interested in leaving the EU, that is a devastating blow.

Furthermore, we do have to ask:

What are constitutions for?

Why did countries across Europe demand Constitutions in the 18th and 19th centuries?

If  this hasn’t convinced you, here’s what Mr Alfred de Zayas, The UN Independent Expert on the promotion of a democratic and equitable international order,  has to say :

“no state can use the principle of territorial integrity to deny the right of self-determination and that arguments about the legality of actions taken by Catalonia’s elected parliament are immaterial“.

Queries: In 21st century Europe, are the victims of undemocratic government who are deprived of the means of political remedy by Constitutional means, to be allowed to do nothing but suffer patiently?

When they line up peacefully  in streets and polling stations to exercise their right to vote, i.e. write an X upon a piece of paper is  all that illegal?

The Spanish State may well state the referendum was illegal.

What the Catalans did certainly wasn’t – when we consider one action at a time.

Must they then  stand by and watch as they are beaten up by police, their parliament is suspended, their entire region threatened by annihilation as Spain activates Art 155 of its Constitution?

Scotland – Shall we stand by?

As soon as we decide Independence might be available, we’ll let you know!

Ms Sturgeon  said that if she deemed a re-run of 2014’s vote was necessary to protect Scotland’s interests, it would take place before the UK formally leaves the EU in 2019 – a view that was later backed up by her deputy, John Swinney.

This position hasn’t changed over the intervening time and events.

Comment: The Scots may be keeping their powder dry until they see the whites of the Unionists’ eyes, but they do need to remember that

Northern Ireland – Shall we attempt a pas de deux?

Not that there’s any chance of one.

have “no basis in fact“.

As Unionism/Loyalism/Orangeism is now angling for Direct Rule from London, it shows once again that they have  lost  their grip  on the statelet that was forged for them  in the first place

What was  the reason for Partition?

2 thoughts on “Family Of Nations In The Doldrums”