It’s  one that Britain has imposed on the rest of us in  Europe.

The UK has to choose:
Leave the single market and customs union and insist on a Hard land Border between NI and the ROI. This will cause thousands of jobs losses in NI, enormous anger in Border communities, and throughout the island of Ireland.

Leave Ireland. Place the EU border in the Irish Sea, so that the Irish and British living in Ireland will continue to live, work and trade as we do now.

Which is it to be?

propping up PM May’s government, with their “reasonable demands”  are 10 DUP MPs after agreeing to be paid £1 billion

PM May has to do the bidding of her political masters  the DUP  if her government wants to get enough votes  for a majority in Westminster – on any issue or Bill.

In other words: the DUP now determines the future of the UK, not the government and not the  MPs the people voted for.

Comment: How humiliating for PM May and Westminster Parliament !

The DUP warned it would never accept a deal that would push a customs border back to the Irish Sea.

Arlene Foster wrote letters to 27 EU Heads of State to tell them so!

Didn’t she know she’s supposed to address all Brexit correspondence to M. Barnier?

Perhaps God told her to write these letters.

Her Deputy Dodds seems to believe the result of the 2017 general election  was a special gift from God to the DUP. 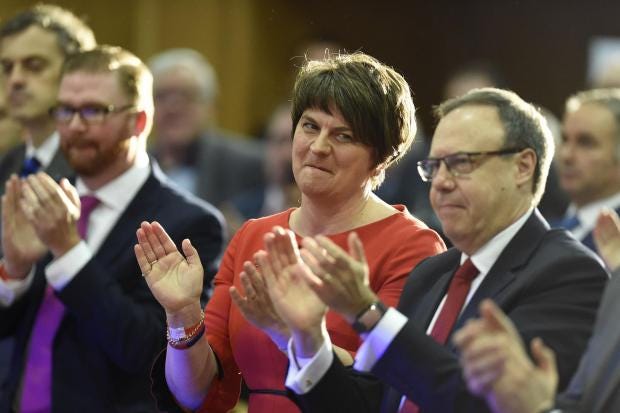 Eclipsed by the DUP!  And their God – the Protestant God of Ulster!

What is the DUP priority? 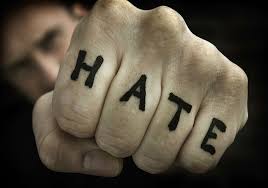 Maintaining and fomenting hatred of SF, Irish nationalists, republicans, uppity equality-seeking Catholics and other individuals  like the LBGT community, women who want to have a legal abortion, victims of sectarian murders and the UK armed forces, Croppies who will not lie down.And the Republic of Ireland.

Why do the DUP want Brexit?

NB: Unionists are already a minority in NI and could lose.

Arlene Foster envisages herself and her party as battling against the traditional enemy in Ireland while Britain sees off the enemy in Europe.

Remember: 1)The future well-being of their own constituents, never mind everyone else in Ireland, Scotland and the UK, is secondary to the DUP’s outdated ideology.

2) The DUP is not more powerful than Leo Varadkar. Or the EU negotiators. Or the British government.Or the British Establishment
Who is Arlene Foster?

What electoral support do the DUP have ?
None in England, Wales or Scotland, 1o Westminster MPs from NI

Remember: Sinn Fein holds the counties on both sides of the NI/ROI border

What is the DUP mandate?
Keep NI within the UK. Diverge as much as possible from the ROI.

Remember: The DUP have held too much sway in Northern Ireland for much too long a time and now they are trying the same bully boy tactics in Westminster.

On what authority can the DUP dictate anything?
The authority of £1 billion

And their God – the Protestant God of Ulster!

And by the money PM May herself sanctioned for them!

What potential damage can the DUP  do?
1. Guarantee No deal at the end of the Brexit negotiations.
2. Wreck the Belfast/Good Friday Agreement (which they never supported anyway). So this probably one of their aims
3. Damage the UK economy, the Irish economy and the EU economy.
4. Precipitate a return to sectarian violence (but provide plenty of jobs and overtime for their security forces). So this probably another of their aims
5. Risk the break-up of the UK. Scotland has said it wants to remain in the single market and customs union at a minimum as every constituency in Scotland voted to remain in the EU

Remember: 1) The DUP don’t care about Brexit. Or its outcome. Or the damage it may do to England and Wales,  or to Scotland or Ireland.

They only care about stopping a united Ireland and Brexit serves their purpose.

Will the Conservative & Unionist Party face down Europe & the Irish Government?
Will it block itself from starting trade talks,  because of  NI which is less than 3% of the UK population?
And because of the DUP, an extremist party which has approximately 1.5% of votes in  the UK?

And none outside of Northern Ireland?

And their God – the Protestant God of Ulster!

And by the money PM May herself sanctioned for them!

What will the EU do?
Most probably refuse  PM May’s dearest wish  to start  Trade Discussions until she comes up with a workable solution to the biggest threat to peace, stability and progress in Ireland – the DUP and its hold over her government and Westminster

PM May will have to devise some means  to neutralise the bigots who are keeping her in power. 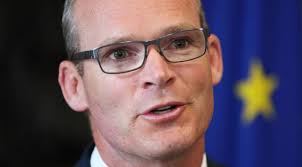 “I don’t think that the solutions for the permanent new relationship between Britain and Ireland and Britain and the EU should be subject to one political party of any hue.

“Lots of parties on the island of Ireland have a view here, and I think we need to try to take all of those views on board”.

2 thoughts on “DUPed Britannia – What a humiliation!”