The Brexit Clock is ticking in an ever downward spiral for the UK as it contends with M.Barnier’s team of highly prepared professional EU negotiators.

The British PM is off on yet another walking holiday (in the EU!!!), after dumping loads of unwelcome legislation on a Parliament that was busy packing up for its holidays.

Westminster will only re-convene for a short time in September before junketing off  for another month or so to indulge in  a series of Party Conferences.

PM Theresa May   allegedly  left a message she was refusing to meet with Ms Sturgeon, the Scottish First Minister

And to bought and paid for Arlene Foster 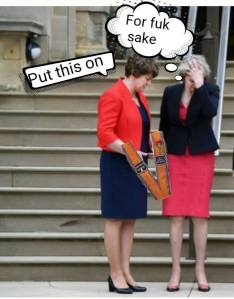 “Lets never mind Catholics, Nationalists, Republicans and Anyone Else who voted remain in Northern Ireland”

To both Scotland and Ireland her message is:

So if that ultimate insult to Scotland’s First Minister  really happened  . . .it’s time for a little concert .

Time to get back to our roots.

Time to remember our shared history in Scotland and Ireland

Query: What is Brexit but an act of aggression against Scotland and Northern Ireland  (which voted against it) and against our gallant allies in Europe?

Comment: Such a passel of knaves in a nation!!!

Here are two Irish songs written at the time of Culloden.

Recommendations: Skip the background info and words if you want.

Just listen to the songs to appreciate their emotional appeal!!

Mo Ghille Mear is a traditional allegorical song – similar to the Gaelic poetic form of the Aisling – in which the poet speaks as Ireland and laments the departure of Prince Charles Edward Stuart (Bonnie Prince Charlie).

As is customary, the poetic text portrays the land in decline in his absence. The drum used in this recording is the Irish single-headed frame drum, the bodhrán.This version is sung by the choir of University College Dublin (UCD)

And there is no word of him, alas

The pleasure of the cheerful cuckoo at noon is gone

The affable nobility are not bothered with sport

He is like Young Aonghus Like Lughaidh Mac Chéin of the great blows Like Cú Raoi, great son of Dáire of the gold Leader of Éire strong in pursuit Chorus

Like Conchubhar venerable son of Nás of the tradition

The pleasant chieftain of the musical [Fenian] Branch Chorus

Our next song is better  known.

Óró, sé do bheatha ‘bhaile  is also  associated with the  cause of Scottish Independence  as it dates  to the 1745-46 Jacobite Rising. It calls the warriors back home in retreat to fight another day.

It became very popular in early 20th century Ireland as Padraig Pearse, one of the leaders of the 1916 Rising, changed the words to suit the circumstances.

ENGLISH: – Welcome oh woman who was so afflicted,

It was our ruin that you were in bondage,
Our fine land in the possession of thieves…
And you sold to the foreigners!

Gráinne O’Malley is coming over the sea,
Armed warriors along with her as her guard,
They are Gaels, not French nor Spanish…
And they will rout the foreigners!

May it please the King of Miracles that we might see,
Although we may live for a week once after,
Gráinne Mhaol and a thousand warriors…
Dispersing the foreigners!

Remember: This is who we are and who we come from!