“When young women were imprisoned throughout the conflict, in this state, in Britain and in the six counties, they knew they were walking in the footsteps of the women of 1916. We were republicans in the mould of Markievicz. We were what we were. We are what we are. Unashamed, unrepentant republicans; to this day and forever on.”SÍLE DARRAGH

The experience of women during the Troubles has often been overlooked, especially those connected to Armagh Gaol

Now empty, it was the only female prison in Northern Ireland until it closed in 1986. The number of female political prisoners grew from 2 in 1971 to more than 100 by 1976; hundreds of women, most aged from mid-teens to mid-twenties,

1 January 1973: – Elizabeth McKee (19) of Belfast became the first woman to be detained under the Detention of Terrorists (Northern Ireland) Act

No charge. No trial. Indefinite imprisonment.

32 other women including Teresa Holland, Margaret Shannon and Anne Walsh were soon to join Elizabeth.

Republican women prisoners endured horrific abuse and violence and yet acknowledgement of that experience has been marginalised as have the unbearable pain and tremendous courage of mothers who were imprisoned.

When the final key turned on a history many will never forget the stories of these prisoners seemed destined to remain unheard and unseen.
In the Footsteps of Anne

fills the gap describing how young girls, married women, pregnant women and even grandmothers withstood horrific abuse and stood up to the British system which aimed at breaking them for over 30 years. Eileen Hickey,

OC of the women prisoners from 1973-77, started compiling the inside stories from the women themselves over 10 years ago with the help of her sister Mary.
Many ex-prisoners were reluctant to collaborate some because they did not want to re-live bad memories, others because they had put the past behind them.

All the women who told their stories remembered some of the worst times, the inhumanity and petty vindictiveness and the incredibly strong bonds forged among the women in prison.

Mariea McClenaghan Williams (Armagh 1973) said “The comradeship between us all was fantastic.Many of us are still great friends, that bond we had will never leave us“

North Belfast republican Mary Doyle was first sent to Armagh women’s jail for republican activities in May 1974 when she was 18 years old.
“Armagh Jail was an old Victorian building. It was freezing. It wasn’t pleasant. The conditions when we were slopping out were grim and not something you thought you could ever get used to.But when your back is against the wall, you get the strength from somewhere. And republicans, we just get on with it. We always have.”

Many recalled where their cells had been, and who their cellmates were. They remembered the protests and they remembered the beatings at the hands of the screws.
Here’s why some women ended up in Armagh gaol
Anne Larkin McCay was arrested at Easter time in 1967 for selling

Easter lilies in Ardoyne (a staunch Republican area in North Belfast).
In 1971 Margaret Boyd Gatt was sentenced to 6 months for wearing

a parka jacket and carrying a hurling stick – “conduct likely to lead to a breach of the peace”
32 women were interned without trial – no charge, no sentence, indefinite imprisonment

For example, Ann Walsh O’Neill was interned in March 1973, Ann Doherty in June of the same year and Anne-Marie Williams in August.
Here are memories of Armagh Gaol from one prison officer, two Open University tutors, one loyalist prisoner and three republican prisoners.

Marie Doherty went into prison as the protest by republican prisoners was escalating.
“I was arrested in February 1977 and when I went into jail the political status had gone at that stage,” she said.
“About six months after I was sentenced a shout went up one evening that there was chicken for dinner which was unusual because we never had chicken on a Tuesday. We all rushed down to the canteen and while we were there the screws moved in and penned us in and others went to search the cells. A riot broke out and we were all locked up for three days continuously with no access to toilet or washing facilities. That was the start of the no wash protest.

Una Nellis says she went off the protest and felt really guilty and bad about leaving her comrades at that time in those conditions. She had a breakdown and ended up on so many different drugs, not realizing the damage they were doing to her.

“I still suffer from mental illness but it does not wreck my life. I do not think I would have suffered from this if it had not been for the conditions in Armagh gaol”
“I still have flashbacks as i am sure other do even though it is 30 years later. I’m still on heavy medication”
“There’s an awful lot of men and women suffering and they try to hide it as I do but our story should be told”.
Republican prisoners in Armagh had close links with the men in Long Kesh.

“There wasn’t a woman in Armagh who wasn’t writing to at least one man in Long Kesh. I shared a cell with the fiancee of Tom McElwee for three years and it was awful watching her, knowing that he was going on hunger strike.

“We knew the first four who were going on and she knew at that stage that Tom’s name was on the list. For her it was not just being separated from him but she also knew what he was going through in Long Kesh”.
Thomas McElwee started his Hunger Strike in the H-Blocks on 8 June 1981. He died on 8 August 1981.

The 10 hunger strikers who died (clockwise from top left) – Raymond McCreesh, Thomas McElwee, Bobby Sands, Patsy O’Hara, Kevin Lynch, Joe McDonnell, Francis Hughes, Michael Devine, Martin Hurson and Kieran Doherty. (Photograph: Pat Langan: PA)
“I remember going to the funerals after they died. The thing that sticks out most in my mind was the funeral of Tom McElwee”.

“I remember seeing his sisters carrying his coffin. That was the first time I had ever seen women carrying a coffin, it just wasn’t done back then. That sticks out in my mind. It was his sisters telling the world that they were proud of their brother and what he had done. When I think of Tom McElwee that is what I think of,”
Jennifer McCann is a Sinn Fein politician who is a member of the Stormont Assembly.

She was sentenced to 20 years for terrorist offences.

In her time as a Republican prisoner she and her colleagues refused to work which meant they were locked up in their cells for most of the day.
“We were let out for a short time to wash and to empty our chamber pots in the mornings. We ate in our cells and we got an hour’s exercise in the afternoons and we were allowed a small period of time for association in the evenings but not at the weekends.We lost a day’s remission for every day we wouldn’t work,”
Jennifer McCann clearly remembers hearing that Bobby Sands had died on hunger strike in the Maze in 1981.

“There used to be heating pipes which ran through the cells. We had smuggled in small crystallised radios”

“which were made on the outside and I passed on the news that he had died.”
Mary Mc Conville

In October 2009, a group of internees and sentenced prisoners began a journey to Armagh Gaol that some of them had only made once before, but which their families had made many times during their years of incarceration.

At the end of the visit, the women were in the courtyard. I pointed out an intact window to Pauline Derry.

“Be a shame to go without leaving your mark,” I said as I handed her a rock.

The other 20 women also intended to “leave their mark.” As the hail of rocks began to sail through the air I heard
“Ye couldn’t break us then and you’ll never break us now.”
“Here’s what we think of your strip searches.”
“We were political prisoners no matter what you all said.”
“Where’s Thatcher now?”
“Armagh thought it would break us – well we’ve broke Armagh.” 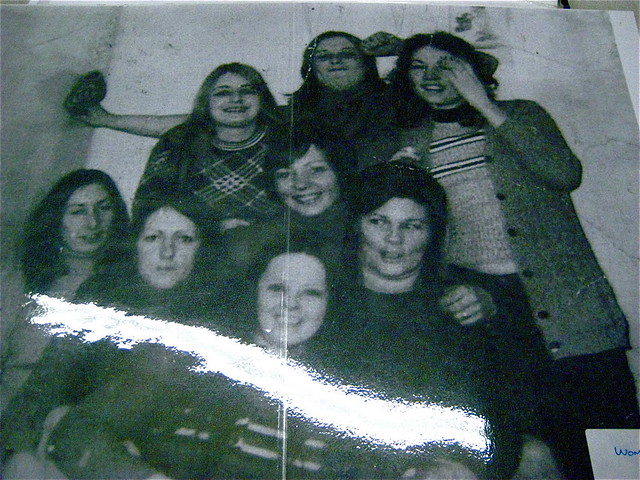 In the Footsteps of Anne

is published by Shanway Press, 1-5 Eia St, Belfast. info@shanway.com
The copyright belongs to the women ex-POWs who submitted their stories.

Eileen Hickey also started an independent museum which is housed in the Conway Mill, Belfast.