“We hold these truths to be self-evident”

1) The UK is a political union which was, and is, driven by England.

The United Kingdom was never  a nation.

It was/is  a device to conceal England’s colonial relation to the other nations inhabiting Great Britain and Ireland. Saville row suits  and grooming,  wealthy charm and an English Home Counties accent, camouflage the treacherous nature of the British Establishment and its political wing at Westminster.

For the last 300 odd years the UK has been designed to benefit England – each way and every way:

Make no mistake, this whole process is about power.
To remain in power Labour, Tories and LibDems will always put England’s interests  first and foremost,

Above everyone else’s. Always.

2) We are not in an equal Union 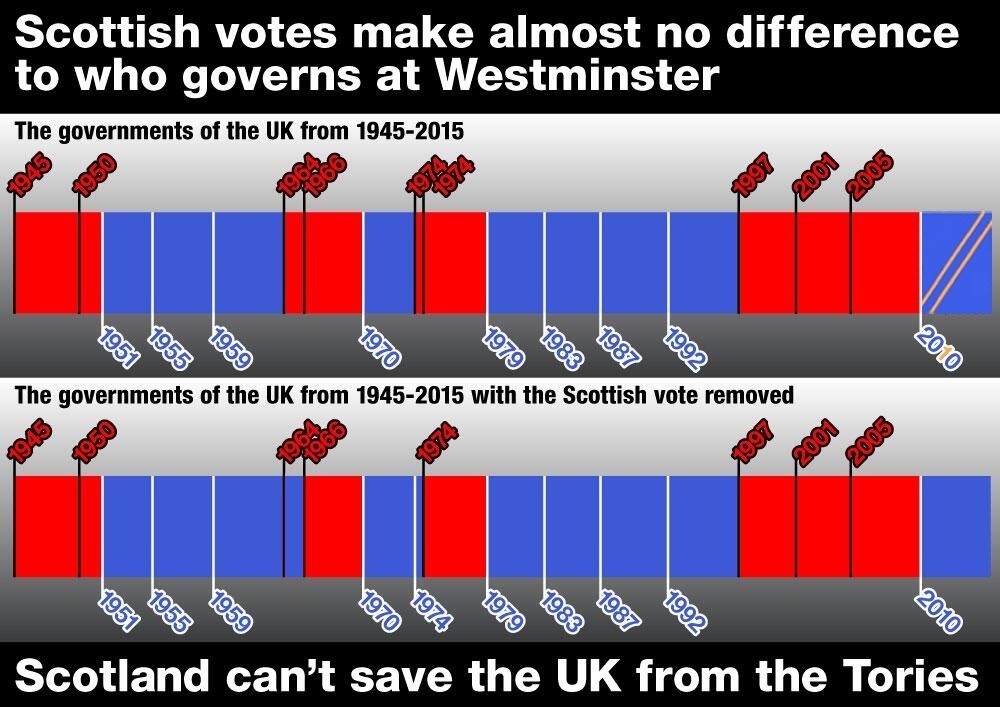 Scotland, an equal partner in the Union, is ruled and dictated by MPs elected by England.

Look how Scottish and Northern Irish MPs are always out-weighed by English MPs in Westminster .

Sinn Fein opting to take its seats  would not change the balance in the slightest.
It would just make Unionist MPs feel better.

“See the Shinners are  in here with us. It’s not something we do that annoys them”

3) There is no such thing as ”British” identity.

Will “British “ do to make you feel you belong and make you work and strive for the greater good of England?

It doesn’t matter if it doesn’t. That’s what you’re getting”

British is an identity only for Unionists.
It is interchangeable and synonymous with “English” which, according to Unionists, we should all strive to copy and be. England wants to absorb its neighbours into a state made in the image of England. And among each of those neighbours is a minority of wannabe English who facilitate this. To make sure we strove and indeed strive today to copy English ways and mannerisms, our Celtic languages and history were replaced by the English language and history.

Comment: As well as facilitating Brexit, Unionists prop up Tory austerity that is destroying the NHS, education, creating millions of homeless on our streets as well as Food Banks (the 21st century equivalent of soup kitchens) to feed our starving millions.

4) Non-Unionists in Northern Ireland and Scotland (who make up close to 50% of the population in each place) see the UK Government as the English Government.

Scotland and Northern Ireland decided to Remain in the EU

Without our consent or mandate Westminster is dragging us to where we don’t want to go.
Deliberately.
Because it’s what a slim majority in England wants.
And challenging the bigotry, authoritarianism and intolerance of the Tory and DUP Brexiteers seems impossible due to “the will of the English people”.

“We don’t care and you don’t count”.
Thus spake England.

Brexit moved  Re- Unification/Independence on to the terrain of  European relations.
Powerlessness in face of the Brexit vote and inability to change it  shocked  many Scots and Northern Irish profoundly.

They made them  question the whole political settlement.

The majority of people in NI who voted to Remain appreciate what it means to have the ROI batting in their corner.
Scotland realises it will never influence England while it is still in the Union.

Comment: Northern Irish and Scottish nationalists/Republicans deeply resent it when Westminster ignores their opinions and views, while constraining them  to remain within the UK.

But it’s going to happen anyway with IndyRef2 when Scotland votes for Independence and a Border Poll when Northern Ireland votes for a Re-United Ireland.

“the conditions for calling such a poll have not been satisfied”.

This type of statements betray an inherently supremacist mindset.

Expressing support  for Irish unity/Scottish independence is considered provocative, in and of itself .

It’s not the Done Thing

The same would never be said of a British politician declaring support for the Union.

Comment: Conversations are stifled and voices subdued if they don’t fall in to the narrow establishment view of what is an acceptable opinion to have.

Who’s to know what suppport there is for a Re-United Ireland and an Independent Scotland?

Better not find out.

7) Unionists fear the result of a Border Poll or IndyRef2

Because they are no longer  sure of getting the result they want.
That’s the only reason why they are resistant to the idea.
That is not a good enough reason to stop people from expressing their wishes on a hugely important constitutional issue at a time when  the UK is being drastically changed.
The only way of determining what ‘the majority’ of the people want on this issue to have a Border Poll/IndyRef2 and see the results.

8) “Stand By the UK” say Unionists

a) Scottish Independence and a Re-united Ireland means the ‘Balkanization” of the UK
Rebuttal: The UK is the ultimate Balkan State.

b)Federalism will keep the Union together after Brexit kicks in

Those plans which never quite seem to make it into their manifesto but will solve all Scotland’s problems.

Rebuttal: That ship has sailed. It’s unfeasible, given the weight of the population in England, lack of constitution, etc. and little to no support for reshaping the UK as a federal State.

c) No change until a significant number of Unionists are coaxed  into accepting the arguments for a United Ireland/Independent Scotland
Rebuttal: In both cases it will legally only take 50%+1.

Why should we have to park the constitutional issue until a majority of unionists – as opposed to a majority of the wider population – is comfortable with the idea of a Re-United ireland and an Independent Scotland? .

d) What do the DUP offer when a United Ireland is proposed?
Civil strife or even civil war and this convincing meme

According to Northern Irish Unionists,  the ROI can’t afford the upkeep of Northern Ireland.

One of the richest parts of the EU can’t afford to look after one of the poorest and most deprived!

Rebuttal: The  DUP seem to actually do the opposite of what is best for the people of N.I .

Comment:Everybody knows that Stormont is over, but nobody can actually come out and say it.

Everybody knows Unionists cannot have their beloved Stormont Assembly in Northern Ireland unless Irish nationalists/Republicans say they can!

Remember: Nationalist/Republican rights do not require a DUP permission slip

e) What  do Unionists say when an Independent Scotland is proposed?

Thoughts such as “Too wee, too poor, too stupid”

Rebuttal: Westminster attempts to undermine Scotland’s Independence with bad performance perceptions no matter how wrong or outdated they are. Unionists rely on propaganda, sectarian divides and in-fighting so that Scotland appears less than capable, less than intelligent and less at peace.

Comment:  The only things holding this union with England together are the British mass media and England’s divide and conquer policy.

2 thoughts on “Telling Westminster What’s What”