The people of Catalonia  go to the polling stations tomorrow, in an election called by the Spanish government.

How does Spain deal with that?

More suspensions, more imprisonments, more elections? Spain is not a democracy like the rest of the European Union. The ghost of Franco is very present.

The culture of intolerance and repression is very present.

Catalonia’s  President is  self-exiled in Brussels, holding a mirror up to the EU and speaking at video conferences that are broadcast as  pre-election meetings! Independence leaders and candidates are in gaol.

Accused of sedition, rebellion and embezzlement because they supported the Declaration of Independence

Query: Will the people “vote them in to get them out”?

We shall see as the votes are counted. Over 80% of voters are expected to make their voices heard.

Comment: The Catalans don’t seem to be suffering from “Voter Fatigue” or “Electionitis”!

How are the Catalonian Independence parties likely to do?

Rather well indeed, according to  these latest projections.They should get the slight majority that’s enough to give Spain a headache.

The big question is whether they get a resounding majority that  supports their demands for independent republic, free from the Kingdom of Spain

PM Rajoy’s party (PP), on the far right in blue with a projected 6% of votes and 6-7 seats, may yet astound us all as it reaches a majority position with over 68 seats!

We send all best wishes to  Catalonia  as she makes her choice tomorrow.

We are confident Catalans will vote wisely in their own interests and for the common good of their region.

The pro-independence ERC, JuntsxCat and CUP are on course for between 67 and 71 seats – with an absolute parliamentary majority secured if they manage 68.

With over 50% of the Catalan vote counted:

Coalition parties for an Independent Catalonia on track for majority (70 seats; 47.4% votes) 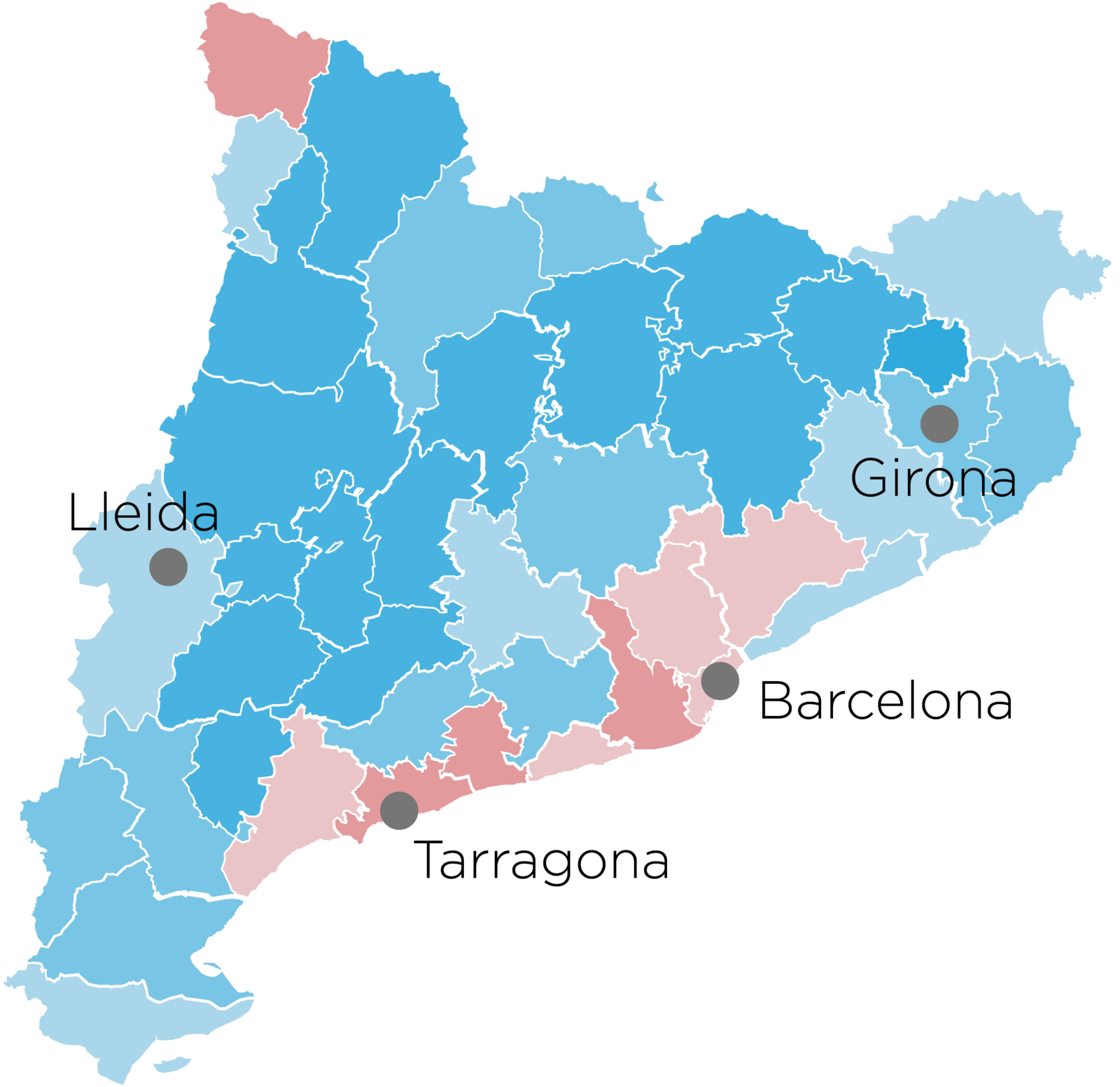 Varying intensities of blue indicate where pro-independence parties got more than 50% of the vote.

Pink/red, areas where they didn’t reach 50%.

Article 155 – which allowed Madrid to take control of Catalonia – is now “dead and buried. The polls have buried it.

Appeal: Madrid – Release the imprisoned pro-independence politicians and sit down at the negotiating table

Appeal:  EU –  Call on Spain to grant Puigdemont an amnesty and allow him to resume his role as President without any further risk of imprisonment.  He is, after all, a newly re-elected head of government, not a serial killer. Your role might possibly be crucial in deciding the future of the EU

UPDATE: The Madrid-based El Pais newspaper is grouping the anti-independence and neutral parties together in order to claim that the ‘No Independentistas’ defeated the ‘Independentistas’ in the popular vote.