This letter below to the Irish Taoiseach, Dr Leo Varadkar  was signed by 200 prominent nationalists living in Northern ireland

It is a perfect example of the NI problem.

These issues  arise every time   Irish citizens in Northern Ireland vote one way, want some civil right, equal treatment  and the British state  and the Unionist parties  decide  they want and are having something else.

And so is everyone else!

It states that our national rights cannot be protected as they ought to be under British rule.

Here’s what one of the signatories had to say

“I don’t believe the average southerner has given thought to the sense of near-betrayal felt when Northern Ireland (aka our North-East Nest [NEN]) was created.  If s/he had, they would have felt a sense of guilt and, one would hope, would have spent less time bewailing unionist fears and more considering the plight into which they plunged Irish nationalists in the north when they passed them into the tender care of Stormont unionism. Fifty years of sectarianism and discrimination, followed by assaults on those who tried to reform these injustices peacefully, then thirty further years when the violence in the north was condemned as the barbarity of the IRA, as though that violence had sprung into existence out of an ahistorical vacuum.”

WE are writing this letter to you as Irish citizens living in the north of Ireland to express our frustration and growing concern over the deepening nature of the ongoing political crises in the north.

We are committed to human rights and cherish our Irish cultural traditions and our Irish national identity, as do hundreds of thousands of others living in this part of our country.

We value equality for all citizens yet continue to be denied rights afforded to all others living on these islands.

We fully endorse the recent call from human rights groups and others on this island for no regression on rights and equality and respect for the principle of equivalence.

In 1998 the overwhelming population of the country voted in favour of the Good Friday Agreement.

We believe that the current crisis has come about fundamentally due to a failure to both implement & defend the Good Friday and St Andrew’s Agreements.

The result has been a denial and refusal of equality, rights and respect towards the section of the community to which we belong, as well as everyone living here.

The impending reality of Brexit now threatens to reinforce partition on this island and revisit a sense of abandonment as experienced by our parents and grandparents.

Comment:This sentence refers to the 1921 Government of Ireland Act which left a large nationalist and Catholic minority trapped with NI’s “Protestant State for a Protestant people”. Rage and frustration at more than 50 years discrimination and unequal treatment for people forced against their will to be   British subjects  within the UK eventually boiled over  and the ensuing “Troubles” lasted for   30 years.

The fact that a majority of voters in the north of Ireland voted to remain within the EU must not be ignored.

Against the stated will of a majority of voters in the north, and notwithstanding recent announcements, Brexit pushes us all into unchartered territory, with huge uncertainty for business and the economy, and continuing doubts about what this will mean in reality for Irish and European citizens living in this region.

We, our children and grandchildren should not be forced out of the EU against our democratic will.

All of this is offensive and unacceptable to us and many others.

Despite the British government’s co-equal and internationally binding responsibility for overseeing the Peace Process with the Irish government, we have no confidence in its commitment to do so with impartiality or objectivity.

This is most recently instanced in the British Government’s refusal to move on legacy inquest rights. The Conservative Party’s political pact with the DUP has now become a grave threat to political progress.

We appeal urgently to you taoiseach, and to the Irish government, to reassure us of your commitment to stand for equality and a human rights based society and your determination to secure and protect the rights of all citizens in the north of Ireland.

Although  the timing is not quite clear,  I presume 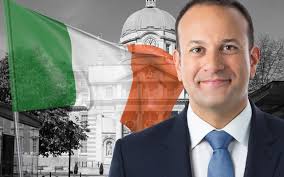 Taoiseach Leo Varadkar  had received this letter before he made this reply:

“To the nationalist people in Northern Ireland, I want to assure you that we have protected your interests throughout these negotiations.
Your birth right as Irish citizens, and therefore as EU citizens, will be protected. There will be no hard border on our island. You will never again be left behind by an Irish Government

Comments: It’s a shame and disgrace that the EU’s policy of non-intervention into internal matters of any state allows EU citizens to be deprived of  Civil, Language  and Marriage Equality Rights that are readily available elsewhere in the EU

Unless the EU stands firmly behind the Irish Government, it could allow EU citizens to be forced out of the EU against their will – just because the UK says so!