Our Imperial Masters have issued their orders!!

Westminster imposed this Brexit Referendum on us. We did not ask for it, nor did we want it.

Scotland and Northern Ireland cannot prevent England going down a particular path, but England can always drag them along too, irrespective of their wishes.

Even though we voted to remain, we were, and will be,  ignored.

Although the Judges didn’t wear their black caps, the verdict was Death to the Union that never was.

Were you shocked? Surprised?

The Conservative Government is only trying to protect England. The rest of us can go to the wall.

This was not a Union.

By excluding Britain’s devolved governments from Brexit decisions the judges showed the UK is nothing but an English  unitary state. Devolved administrations are mere entities that are subject to England. They count for nothing.

This  single English state with its possessions and   chattels soothed its serfs  by illusions of “All in this together”  and “Better Together” and deceived them with Devolution,  and their own propensity to trust written Agreements

Yesterday the myth of Westminster Parliament survived and the myth of the ‘United’ Kingdom died.

This great Union, this family of nations, is a mirage.

Mr UK Britain told us so, on this very blog, in our exclusive interview, a couple of weeks ago

“Alba Scotia can whistle down the wind if she thinks I’m going to allow her to get a word in edgeways between me and Europa”.

“Scotland and Ireland will simply accept whatever fate I impose. And they will do so meekly and without protest”.

This was not a Union

The Regional Assemblies will not have a voice, but

the unelected House of Lords gets a say on Brexit.

How that undemocratic principle plays with  Scottish and Irish  voters will be interesting.

‘This raises fundamental issues above and beyond that of EU membership. Is Scotland content for our future to be dictated by an increasingly right-wing Westminster with just one MP here – or is it better that we take or future into our own hand? It is becoming ever clearer that this is a choice that Scotland must make’.

As far as Northern Ireland is concerned, between silencing our voice on Brexit  and the collapse of power sharing, the Good Friday Agreement seems dead in the water. 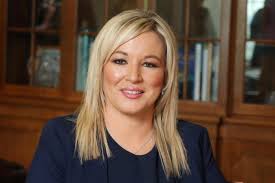 ” Sinn Féin will only return to government if there is “real and meaningful change”.

Comment: I don’t think this was the change SF was looking for!

“The failure to recognise the will of the people of the North is a failure by the Tory government, continually refusing to acknowledge the will of what the people here have asked for.

“Brexit will absolutely undermine the Good Friday Agreement and the principle of consent.“

Interestingly the “Imperial Masters” taught the DUP well.
The DUP ‘roadblock’ every nationalist aspiration in a one party state fashion.
Like Westminster, with their unwillingness to share power in a United Kingdom, they have cut the ties of a Union that never was.

This was not a Union

The Judges themselves pointed out, with reference to the defunct Sewell Convention that, as conventions are political rather than legal so are the consequences.

The logical consequences of this judgement point  towards regional alienation and the ultimate breakup of the United Kingdom, no matter how fast the English government moves in its Brexit negotiations to forestall a second Independence Referendum in Scotland and a Border Poll in Ireland.

If England succeeds you can expect an end to Regional Assemblies and the Scottish Parliament. Prepare to abandon  all hope of ever exiting the Union that never was.

Despite this potentially bleak short-term outlook here’s a message for the Unionists:

Mourn for an idea of the UK that is now dead, no matter how long its death throes last, no matter how hard you beat your Loyalist drums in its Requiem.

Only one reason remains for  the “Union that never was”

England’s firm intention to maintain her stranglehold on us, no matter what we want.

2 thoughts on “Shut Up and Eat your Brexit – England’s Decision….”