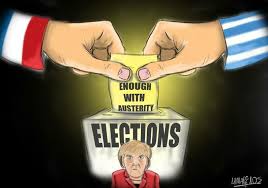 You’ve read or heard all the arguments for and against the position of the Greek government.

* Greece can never pay its debt.  As we Irish say 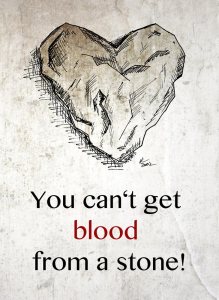 * the Institutions (Troika i.e. EU, ECB, IMF) want to make an example of Greece and

*Disabuse anti-austerity parties thoughout Europe  of  the idea they can be challenged  (Podemos in Spain, SNP in Scotland, SF in Ireland, 5 Star Movement in Italy, even Le Front National in France and the Golden Dawn in Greece itself are some of  the next targets)

It doesn’t matter what happened in the past – ordinary decent Greeks need our support now.  All we are saying is  . . . 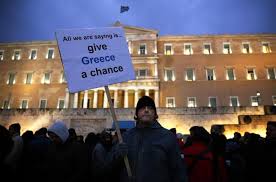 *we support their democratic choice of Syriza as their government

*we stand with them as the ECB tightens the screws and the international press launches a fear offensive (which we saw in Scotland last year at referendum time) ,

*Greeks have  the right to make a free choice about the type of society they want and need. 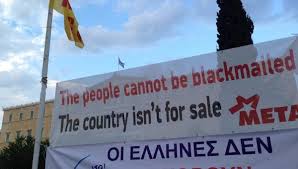 Syriza  recommends a NO in the referendum  for similar reasons
*Negotiations have stalled because Greece’s creditors (a) refused to reduce our un-payable public debt and (b) insisted that it should be repaid ‘parametrically’ by the weakest members of our society, their children and their grandchildren

* Since the announcement of the referendum, official Europe has sent signals that they are ready to discuss debt restructuring. These signals show that official Europe too would vote NO on its own ‘final’ offer. 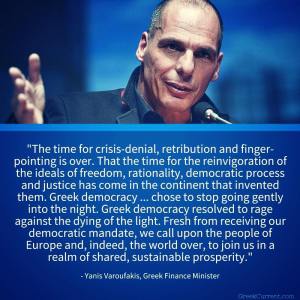 Mr Varoufakis, Finance Minister, attempts to reassure Greeks they will remain within their European homeland even though  Mr Schaueble and others would gladly see the back of them
*Greece will stay in the euro. Deposits in Greece’s banks are safe. Creditors have chosen the strategy of blackmail based on bank closures. The current impasse is due to this choice by the creditors and not by the Greek government discontinuing the negotiations or any Greek thoughts of Grexit and devaluation. Greece’s place in the Eurozone and in the European Union is non-negotiable.
*The future demands a proud Greece within the Eurozone and at the heart of Europe. This future demands that Greeks say a big NO on Sunday, that we stay in the Euro Area, and that, with the power vested upon us by that NO, we renegotiate Greece’s public debt as well as the distribution of burdens between the haves and the have nots.

“Greece have to be given room to grow their economy; it has to be sorted because the European project cannot go on with the situation as it is in Greece.” 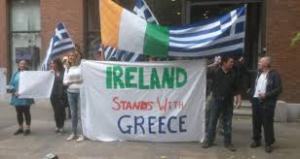 Online, at home, at work, down the pub,  on your street, in your Parliament, in Europe and the rest of the world.

2 thoughts on “6+ reasons to support the vote for OXI”