I’ve been doing a bit of reading this week which is why I haven’t been posting much. This news also got me thinking

“Permission has been granted for a judicial review into a series of murders linked to a loyalist gang based in south Armagh in the 1970s“.

What have you been reading and studying? 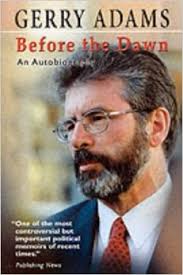 – Before the dawn by Gerry Adams

So what do you think?
In the “dirty war” agents of the State seriously violated human rights, up to and including murder.

What was “the dirty war”?
The alternative to the “colonial-type”approach of the early 1970s.

What was the “colonial approach?
Treat NI like an insurgent colony. Easiest to explain it by examples:
* the “Falls Curfew” (July 1970);

Gerry Adams wrote “General Freeland sealed off an area of about 50 small streetso of tightly packed terrace houses in the lower falls. From helicopters hovering over the rooftops, loudspeakers broadcast a message of war, declaring a curfew which confined the local people to their homes for an indefinite period while thousands of  troops went on the rampage”

Maudling’s delclaration of war and the massacre in Derry had no effect. Far from calming the province, and crushing the IRA, these events strengthened the IRA and exacerbated the conflict.

Why didn’t “the colonial approach” work?
* UK subjects were being treated like “natives”

Comment: what could happen in a ” real colonial ” situation was not acceptable on the streets of the United Kingdom

* Events were taking place under the watchful eye of the media, which subjected the actions of the British Army to scrutiny.

Comment: what might have been ignored when it occurred “out of sight, out of mind,” could not so easily be dismissed when it was seen live on people’s television sets.

Colonel Michael Dewar recorded: “outdated riot-control techniques used in far-flung corners of the Empire were tried initially, but found to be inadequate and unsuitable.”

Why was the “colonial-type” struggle abandoned?
It  strengthened the IRA and was associated with  large-scale violations of human rights,
Comment: We’ve already looked at massacres in  Ballymurphy,

and the  New Lodge

So what came next?
The security services attempted to maneuver between the requirements of effectiveness and legality to deprive the IRA of legitimacy and reduce its allure within the Catholic community.
There were several approaches.  Today we’ll look at one.

Individuals involved with terrorist organizations gave testimony against their former comrades, in return for immunity from prosecution. This testimony was then accepted by the “Diplock” court judges

as reliable evidence that could be used as the basis for a conviction. From November 1981 – 1983, testimony from 7 Loyalist and 18 Republican “supergrasses” led to 590 people being charged with paramilitary-related activities in Northern Ireland, many of whom were convicted.

But many of the convictions were subsequently reversed on appeal and by 1986, over 50 % of those convicted had had their sentences quashed

What were the aims?
The testimony and confession of these informers would lead to the imprisonment of alleged paramilitaries, frighten and intimidate members of rebellious organisations and deter others from joining .

Comment: Ultimately, “supergrasses” failed because of  doubts about the legality of the process.

Andrew Boyd wrote “Informers are universally despied, even by those who pay them and make use of their services, and if they live at all long after their acts of betrayal, they live precarious and miserable lives”