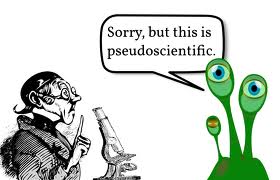 “Unionists afraid to ratify a Haass deal without us“, claim hardliners!

It is understood that the DUP and UUP consulted hardliners outside the talks on issues including:
• A parading code of conduct that would have banned loyalist bands named after paramilitaries. The planned code on parades would not allow references, including music, to proscribed organisations past or present, or “paramilitary-style clothing at all times during an event”. 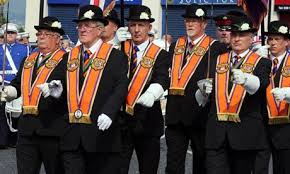 Here is the Orange Order, marching or rather “walking” as they prefer to say . Is this a pseudo-military uniform and formation?
On the first 12th July celebration (July 12th 1796)

Lord Gosford himself estimated 1,500 men in Orange regalia “marched in military formation” into the grounds of his estate
The sash, symbol of the Orange Order
Sashes have been common items of military costume for centuries. King William is reported to have worn

an orange-coloured sash of “the purest watered silk” at the Battle of the Boyne. The British Army, like other modern armies, preserves sashes to be worn by officers in ceremonial uniforms,

Orange Order sashes were originally of the ceremonial shoulder-to-hip variety as worn by the British military. 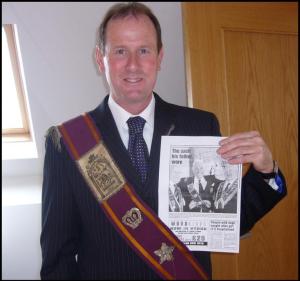 Orangemen in Ireland did not however adopt the practice of wearing sashes until the nineteenth century.
Nov 5th 1833: According to the Orange historian W.H. Wolsey, they marched,”without flags or music” but “in full uniform‟ (meaning they wore their sashes). This is the earliest known record of an Orange march on the Garvaghy Road and it is not without significance that the Orange sash was regarded as being a uniform. In more recent decades the traditional sash has given way to a more manageable V-shaped collarettes 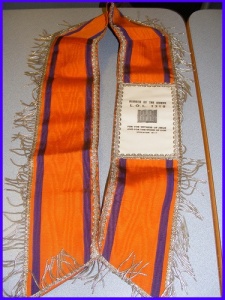 which are still generally referred to as sashes.
Comment: Looks like the sash could be construed as a military-style uniform. It certainly celebrates battles of the past.

It is old but it is beautiful, and its colors they are fine
It was worn at Derry, Aughrim, Enniskillen and the Boyne.
My father wore it as a youth in bygone days of yore
And on the Twelfth I love to wear the sash my father wore
Comment: Please observe they are not “marching” Everybody “walks” like that

is a hard felt hat with a rounded crown which was originally created in 1849 for the British soldier and politician Edward Coke. Later it would come to be worn as work dress by the officers of the Queen’s Guards

they are well-decorated veterans like those men in the picture above. They’re fooling no one! 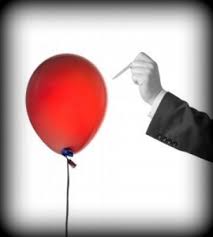 Originally called the iron hat, the bowler was heavier than other hats, serving as a early version of the hard hat. In Victorian times, the bowler was a lower middle/working class hat and was typically worn by valets and butlers.

Comment: “There are few graduates in the ranks of the Orange Order” says one Orangeman “To all intents and purposes it is a proletarian outfit, heavy with riff-raff, plus an argumentative, obscurantist, rural wing.
(NB note military terminology ranks, outfit, wing)

White gloves (cotton or goatskin) were once a staple of any man’s wardrobe for evening wear. Military personnel wear the white gloves only with their dress uniform on formal occasions 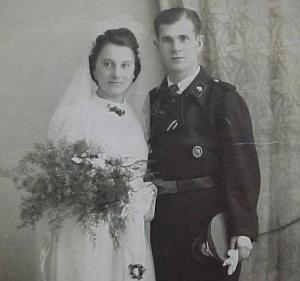 Wearing white gloves at anything else would appear pretentious.
Comment: The 12th is a formal occasion for the Orange Order but marchers do appear “pretentious”i.e. trying to appear or sound more important or clever than they are

The sword is a traditional symbol of position and authority,

and was the armament of knights (the officer class of the middle ages). Modern occasions to wear swords include any appearance at Court,officers’ weddings, any event in dress uniforms where the rank-and-file carry arms – in this case furled umbrellas. Orangemen carry these items to attack people 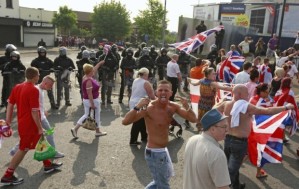 who was a member of the DUP talks team, said it was a “fair assessment” that the Haass proposals for a code of conduct would have “criminalised Orange culture”.

Comment: Hasn’t the Orange Order criminalised itself by using pseudo-military/para-military trappings to hide its anti-catholicism?

Will we ever see the Orange Order “Walking “like this? 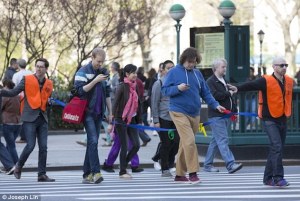 4 thoughts on “The Orange Order is a Pseudo-Military Organization”