In Northern Ireland Unionism/Loyalism is built on the political myths and symbols of Protestantism and Britishness i.e.they are anti-Catholic

realised in the early 1920s that it was an offence simply to be born Catholic in NI.

Summer 1920: Over 8,000 Catholic workers were expelled from the shipyard, nearly all the engineering works, most of the large factories, warehouses, shops and concerns of every kind. Scarcely one of them has since been allowed to return

NI was a “cold house” for Catholics with relentless use of the past as a political weapon to browbeat them even more.

In the mind of Ulster Unionists/Loyalists

Catholics are assumed to be hostile to the institutions of the Union (disloyal). All Catholics are suspect, irrespective of their status or achievements. The state’s core values of Protestantism and Britishness defined them as outsiders.

Catholics were ‘the enemy within’ and were seen as posing a security problem. They were offered citizenship in the new state but only on terms which made them second-class citizens.

1914: Irishmen joined the British Army in very large numbers.
206,000 Irishmen served in the British forces during WWI
*58,000 were already enlisted in the British Regular Army or Navy
*24,000 originated from the Redmondite National Volunteers
*80,000 were mostly urban poor, hoping for a pay rise and the chance to learn a trade.
*Some 26,000 recruits came directly from the 1912 Ulster Volunteers – the unionist militia.

UNIONIST MYTH: Remember! Only the UVF fought in WWI and deserves to be commemorated

The poppy has long been the preserve of the unionist/loyalist community and is seen by many as a political symbol and a symbol of Britishness representing support for the British Army.

After WW1: Unionists/Loyalists and Catholic ex-servicemen
http://www.britishpathe.com/video/demobbed-soldiers
1918: When young Catholic men were demobbed

and sent home to Belfast they found worse enemies than the Germans waiting for them
1921: Catholic ex-servicemen had to leave Craigavon Military Hospital near Belfast and seek treatment elsewhere after they received

wounded twice and gassed during the war,

together with 3 other young Catholic men.

home on leave from the Connaught Rangers, from his house in Urney St, making his family of young children homeless
Joseph Walshe (39), who had served in the Middle East, was battered to death in bed with a sledgehammer

His seven-year-old son Michael was shot and died from his wounds the next day. Another son, Frank (14), was shot in the thigh but survived.
1935: Charles Tierney, a British Army Reservist was beaten up,

Alone in the UK, the British Government decided against conscription in Northern ireland

because the Stormont Parliament told them a large minority did not regard themselves as British.

1940: A senior civil servant from the War Cabinet assessed the contribution Northern Ireland was making or could make to the war effort. He reported a general lack of concern, indifference on the part of the Ni government, technical stagnation in the principal industries particularly shipbuilding, engineering and linen which had remained as they had been in the 19th century
1945: James Magennis VC

could not get a job because Ulster Loyalists “were reluctant to employ Roman Catholics“.

Mr Magennis moved to Huddersfield where he became an honoured citizen
1999: Long after he had died, and more than 50 years after he won the VC, a monument was finally erected in his honour at Belfast City hall

member of the British Legion, parish priest in Ahoghill, was invited to conduct the Remembrance day service in Ballymena.

The Paisleyite chairman of the Town Council “refused to take part in any service at which a Roman catholic priest was officiating”
1978: Canon Murphy was kidnapped by a Loyalist gang

and held hostage because the IRA had abducted a member of the RUC
Johnny McNabb,

a Catholic serving in the Irish Guards when the Troubles erupted in Northern Ireland, was repeatedly the subject of interrogation for suspected terrorist activity.
On one occasion he was interrogated for seven hours by paratroopers in Bessbrook after he inadvertently ended up in Crossmaglen.Police officers in London detained him for two days while they questioned him in relation to bombings in the capital in the 1970s.
If Catholics, Republicans and nationalists do not honour our non-Unionist Irish dead who will?

Next year if you want to recognize our ancestors who joined the British Army during WW1 or at any other time for whatever reason (poverty, Home Rule, adventure, etc) and who died or were injured, 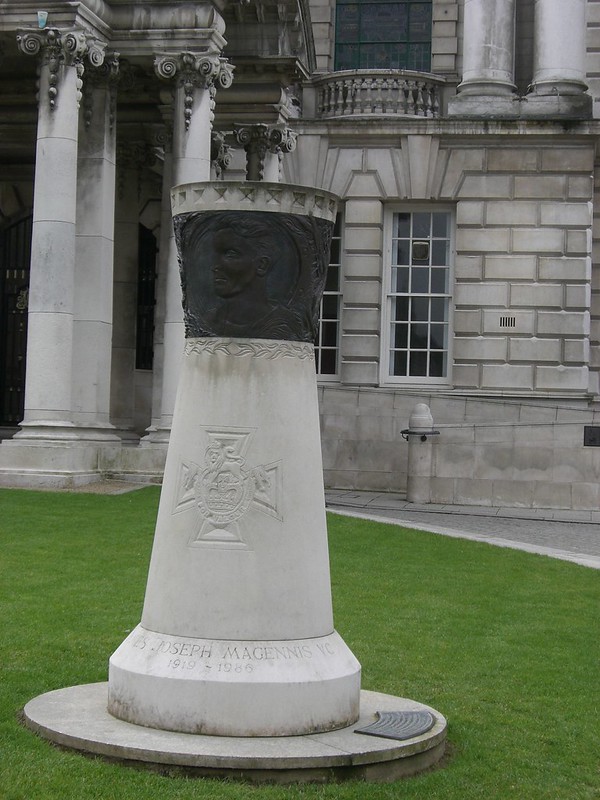