former Metropolitan Police Commissioner who uncovered collusion between the RUC, British army and loyalists:
“Collusion is evidenced in many ways. This ranges from the wilful failure to keep records, the absence of accountability, the withholding of intelligence and information, through to the extreme of agents being involved in murder”
The British government’s dealings in Ireland have long been characterised by cover-ups, deceit and perfidiousness. This includes collaboration between British security forces and loyalist paramilitaries, the obstruction of legal investigations, the refusal to hold public enquiries, and the introduction of a new form of intelligence-led policing which, in many cases, allowed informers to act with impunity.

is, as she promised in the video above, about to publish a new book called “Lethal Allies“. It deals with just one small area in Ireland, the mid-Ulster region of Armagh, Tyrone, Fermanagh and Monaghan and one brief period of time from 1972 to 1976. In that time and that place over 120 Irish men, women and children were killed and hundreds more wounded by one small terrorist formation – the infamous Glenanne Gang. It included members of the RUC, UDR and British Army intelligence, as well as Loyalist paramilitaries from Counties Armagh and Tyrone – all with the tacit authority of the nation-state of Great Britain behind them.Here’s the link to the Channel 4 report on her book and her evidence.
http://link.brightcove.com/services/player/bcpid601325122001?bckey=AQ~~,AAAAAEabvr4~,Wtd2HT-p_Vh4qBcIZDrvZlvNCU8nxccG&bctid=2764247783001
And here’s Anne herself answering some questions about her work

You might also like this interview with Anne
http://www.newstalk.ie/player/podcasts/The_Pat_Kenny_Show/The_Pat_Kenny_Show_Highlights/36592/2/Anne_Cadwallader’s_explosive_new_book_on_the_Troubles
Some Key Atrocities that are linked to collusion between the RUC/Loyalist murder gangs/British forces: 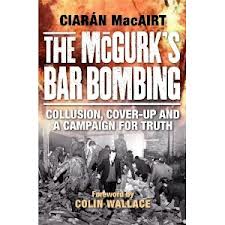 6 Catholics were killed at the New Lodge/Antrim Road ,junction in Belfast on 3 February 1973,

3 members of the Miami Showband were shot and killed on July 31st 1975. A fake army patrol made up of Ulster Defence Regiment soldiers and Ulster Volunteer Force members stopped them at a bogus checkpoint outside Newry. A premature bomb expolosion killed two of the UVF gang that targeted them.

Human Rights lawyer, Mr. Pat Finucane, graduate of Trinity College Dublin was murdered in his own house, in front of his family, on 12 February 1989

Some key points about collusion investigations/revelations:
*They are like therapy for the British state. British elements admit to some wrongdoing in Northern Ireland without incriminating the entire state.
*They give the impression that state collusion with loyalist killers was largely the work of ‘rogue elements’ within Britain’s otherwise benign and peacekeeping security force in Northern Ireland, when in truth collusion was widespread.
* Far from being isolated incidents, the actions of loyalist paramilitaries ( mostly sectarian attacks on Catholics and targeted assassinations of Sinn Fein and IRA members) were part and parcel of Britain’s brutal occupation of Northern Ireland.
*The ultimate aim of the collusion investigations/revelations is to placate republicans/nationalists and convince them their grievances are being taken seriously.
*They keep the ‘peace process’ on track
*They boost the British authorities’ flagging moral authority and claims to impartiality in Northern Ireland.

Amnesty International Report 9 February 1994
It claimed that there was “mounting evidence” of collusion between the security forces and Loyalist paramilitaries. The RUC said that the claims were “utter nonsense”.

Final considerations
*Britain enlisted Protestant militias as auxiliaries while presenting itself as a neutral arbitrator
*Britain is exposed not as peacemaker but as perpetrator, spreading terror and spilling blood
*Britain was the most powerful presence among the warlords in Northern Ireland for over 30 years
*Her Majesty’s Government and her people need to assimilate these facts about their behaviour towards other British citizens before they can consign collusion to the past.

6 thoughts on “Collusion is not an illusion”